5 HAUNTED PLACES IN PA YOU CAN VISIT TODAY Day 5

Built around 1762, the Jean Bonnet Tavern was a welcome sight for travelers heading to the western frontier, which at the time wasn’t far beyond Pittsburgh. The tavern was built along Forbes Road, which is the Lincoln Highway (Route 30) today. Forbes Road was constructed by British troops to connect a series of forts during the French & Indian War. It is known that General Forbes stopped at the tavern to await reinforcements during his campaign to capture Fort Duquesne (Pittsburgh) from the French. The Jean Bonnet also became a meeting place for farmers rebelling against the government imposed whiskey tax during the Whiskey Rebellion.

Over the centuries the Jean Bonnet Tavern has seen a lot of guests come and go. Today, you can still get a delicious meal in the restaurant, drink and a conversation in the tavern and a comfortable night’s sleep in one of the four guest rooms. Spending an evening at the Jean Bonnet is like stepping back in time. The native stone, chestnut beams and massive fireplaces harken back to the earliest days of our nation.

Guests who stay at the Jean Bonnet have been known to leave with more than what they expected. Reports of visitors being touched by an unseen hand, men in frontier clothing drinking in the tavern that on second glance aren’t there and the attic door opening and closing on its own. These are a few of most widely reported incidents at the tavern. Guests often check in just for the hopes of having a ghostly experience. 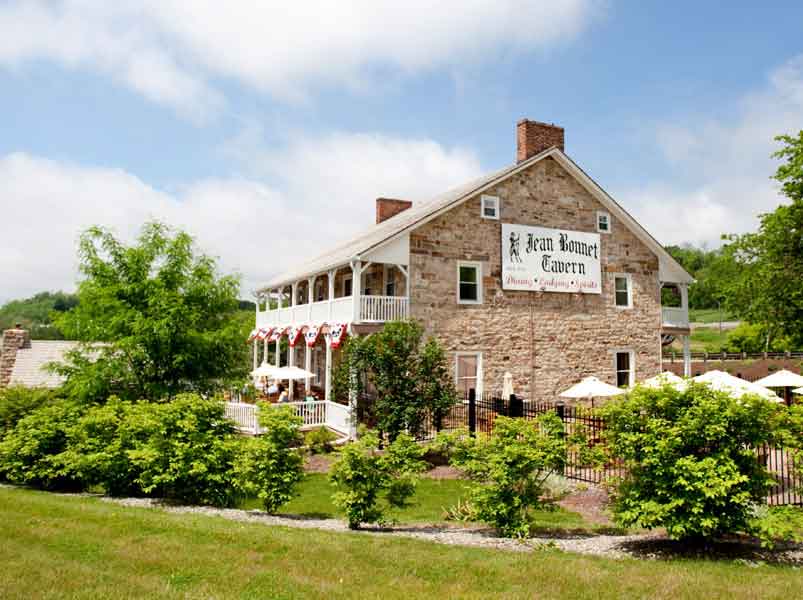