Community pride and merrymaking are at play across Pennsylvania, as the symbols of towns are made ready for the big show. While billions of people from around the world will watch as the ball descends on Times Square, others will celebrate closer to home. Revelers can still attend spectacular NYE celebrations in PA cities like Philadelphia and Pittsburgh, but smaller towns have found a unique way to stand out from the crowd.

Who needs an 11,875-pound Waterford Crystal ball when you have friends, family, food, entertainment and a place to go to the bathroom? Among the “insider tips” for attending NYE in Times Square is that that you should arrive by noon, but don’t drink much because there are no public bathrooms and you probably won’t find a business to allow you to use theirs. I’m pretty sure you’ll have a better chance of finding a restroom (or at least a porta-potty) in Dillsburg than in New York City on New Year’s Eve. So why not give one of these NYE celebrations a try? Each has its own answer to the “ball” that drops on Times Square.

Live entertainment, food, and hot chocolate will be available. Bucky the Beaver will drop at midnight, followed by fireworks.
www.facebook.com/Rescue-Hose-Company-20-232715103442581/

First Night Carlisle is family-friendly, non-alcoholic event featuring multiple entertainment performances and culminating with the dropping of the First Night Button designed by a child from the community. The button drop will be followed by fireworks.
www.firstnightcarlisle.org

4:30 – Midnight. Family entertainment. Baby Pickle Drop at 7pm for the little ones. Pickle drop at midnight followed by fireworks.
http://www.dillsburg.com/Flyers/2017%20pickle%20drop%20flyer.pdf

10:30 pm to 12:30 am
A 10-foot replica of the Lightning Guider sled that was manufactured at the Standard Sled Factory in Duncannon will descend amidst the backdrop of fireworks.
www.facebook.com/DuncannonBorough

Events throughout the city from 9 pm to midnight. Featuring fireworks, a DJ, children’s activities and a Strawberry drop ceremony beginning at 11:45 outside the Hilton Harrisburg.
http://harrisburgpa.gov/nye/

HERSHEY’S KISS – Hershey, Dauphin County
On the Square, Hershey
9 pm to midnight
Free concert with American Idol Kris Allen before the Hershey Kiss is raised above the square. When the kiss gets to the top one of the best NYE fireworks displays in the nation will awe spectators.
www.hersheynewyears.org

MUSHROOM – Kennett Square
The Square
Music, food and entertainment will all be on the bill for Kennett Square’s New Year’s Eve celebration. The festivities will kick off with the Raising and Lighting of the 700-pound mushroom between 8:45 pm. The night will conclude with the lowering of the mushroom which pays tribute to the town’s title of “Mushroom Capital of the World”
http://midnightinthesquare.com/

RED ROSE – Lancaster, Lancaster County
Binns Park, N. Queen Street
10 pm to midnight
Free concert with the Big Fat Meanies. Plus, many more performances throughout Lancaster. The lowering of the red rose (Lancaster is known as the Red Rose City) and fireworks at midnight.
www.visitlancastercity.com/new-years-eve

The festivities begin at 10 before the 200 pounds of Lebanon Bologna is lowered. Food, entertainment and tons of family fun.
http://www.lebanonpa.org/Lists/Calendar/customDisplay.aspx?ID=238

9 pm to 12:15 am
The family-friendly, non-alcoholic event will usher in 2018 by lowering a cast iron kettle to pay homage to the annual McClure Bean Soup Festival. There will be a food, activities for kids, raffles and much more.
https://www.facebook.com/KettleDrop1/

Each year since 2004 a galvanized wrench is dropped at midnight to celebrate the town’s founders who were mechanics that made and repaired covered wagons traveling west in the early 1800’s. Food, live entertainment, children’s programs and more.
www.wrenchdrop.org

Hot refreshments, entertainment and the lowering of the Huckleberry from the courthouse clock tower at midnight
www.bloomfieldboro.org/page12.html

At midnight a huge bottle of Yuengling Beer will be raised in Garfield Square. 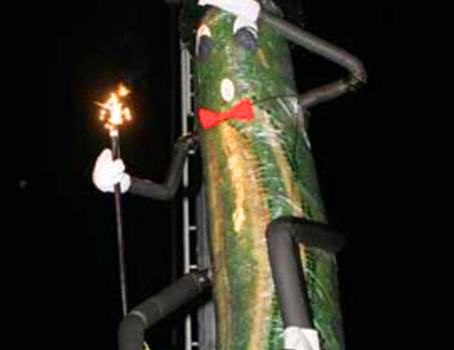