Set Sail on the US Brig Niagara

It’s easy to forget that there were two major wars with the British more than two centuries ago until one visits the Erie Maritime Museum, home of the USS Niagara, a replica of the Brig Niagara that served as the flagship of the US Navy on Lake Erie. The combined forces of Colonial America won the war for independence from the British crown in the 1770s, but the imperial forces remained at the fledgling nation’s back door and waged a major campaign to recoup their losses during the War of 1812. 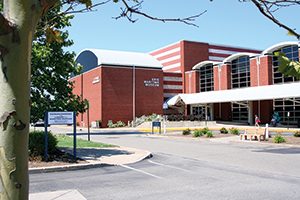 Much of this war was fought on Lake Erie, one of the five Great Lakes that were, at that time, among America’s hotly contested frontiers. Possession of the lake and its ports changed hands several times during the naval battles waged there through 1814. In hindsight, it may seem that little progress was realized from the fiercest of skirmishes. In the end, only a few prize battleships of the large American fleet, including the USS Niagara, survived intact.

Nearly 111 feet long and 119 feet tall, the Niagara was sunk for preservation, then raised and rebuilt several times before its official designation and reverence as the State Ship of Pennsylvania. Today, it serves as an ambassador ship for the commonwealth and a training ship – or sailing school vessel – for the US Coast Guard. When “off duty,” the Niagara is accessible to the public as both a museum and for four-hour public excursions. 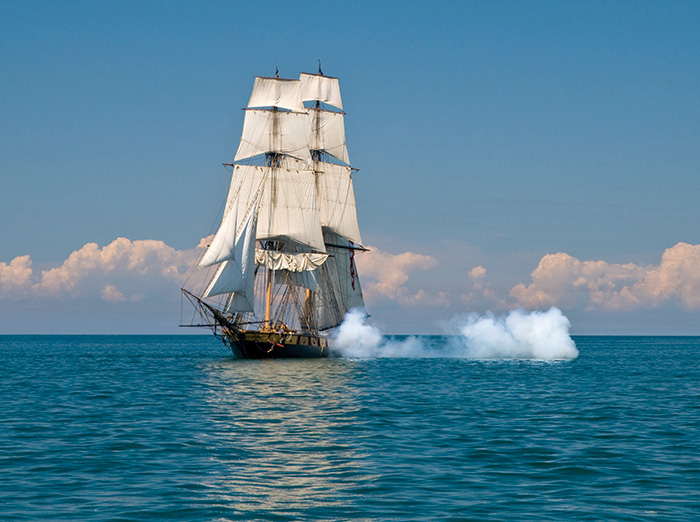 “Attendance is always greater when the ship is here,” said Erie Maritime Museum director and ship Senior Capt. Walter Rykba. The Niagara routinely sails from Erie to Duluth, Minn., and is berthed for maintenance from October to March. Even during the winter months, Rykba maintains, there is plenty to see below the deck. 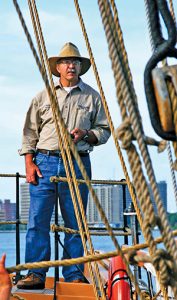 Guides and historical interpreters take visitors back to a time when a crew of 155 men and boys manned the ship, its 18 cannons and two long guns. The story of Commodore Oliver Hazard Perry’s victories upon the vessel will come to life through a working crew carrying on a centuries-old tradition.

“Two hundred years ago, if someone gave you the news about another country that they had seen, odds are nine to one that that person would have been a sailor,” Rykba explained. “Ships are the way that we introduced ourselves to the world.”

Far from a luxury cruise on a passenger ship, all participants in a Niagara day sail are considered students on an educational venture. “The appeal of it is that it is very participatory,” said Rykba. Day sailors are buddied with an experienced crew member, called for musters, briefed on their expectations, and then put to work. “They pitch in and pull the lines to set the sails,” he noted.

Watching people on the ship turn from “green hands” to sure-footed crew assistants is Rykba’s favorite part of the job. “I think that’s an important part of the culture to be preserved,” he remarked.

“It’s a rewarding experience to be able to advocate for such an incredible mission,” added museum marketing and special events manager Cristy Cook, who noted that people from all walks of life visit the historic site.

Prices for the unique sailing experience vary from $86 per person for the general public and $65 each for members of the Flagship Niagara League, the organization that oversees the maintenance and use of the ship under the Pennsylvania Historical and Museum Commission. The Niagara is unique in that it is one of only two ships remaining from the War of 1812, the other being the USS Constitution at Boston.

The programs and exhibits of the Erie Maritime Museum, 150 E. Front St., Erie, go well beyond the USS Niagara. The harbor at Erie, largely protected from the lake’s harshest elements by beautiful Presque Isle, has a long history as a merchant port, a fishery and an early steam-powered electricity generation station. Ship models include a reconstructed mid-ship section of the Lawrence, once a sister ship to the Niagara, and artifacts associated with the USS Michigan, the first iron-hulled ship in the US Navy fleet.

Family-friendly events that are free to the public begin in March and continue throughout the year. Pennsylvania’s 337th anniversary of Charter Day – recognizing the date in 1681 when England’s King Charles II granted a charter to William Penn for what would become the commonwealth – will be celebrated on Sunday, March 11. 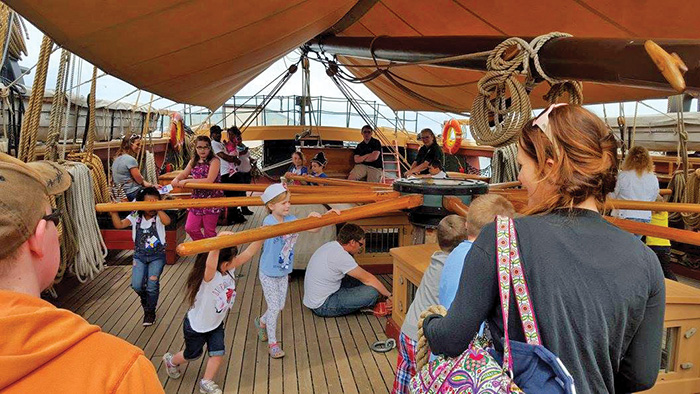 Friday, March 30, is reserved for Little Mates Eggs-travaganza Day, featuring an egg hunt in the museum and a visit from the Easter Bunny. Little Mates Discovery Day is Saturday, May 12. Highlights include educational, hands-on maritime activities, such as knot-tying, gunnery, use of signal flags and a lesson in sea-faring terminology.

Wednesday, July 4, is more than just a huge celebration of America’s independence at the Maritime Museum. It also marks the 205th anniversary of the day the USS Niagara set sail.

To learn more about Erie Maritime Museum exhibits, special events and the schedule for day sails on the USS Niagara, log on to flagshipniagara.org