Revisiting the Cause of Freedom

Philadelphia is considered the birthplace of our nation. Still, it was the fields and forests of the surrounding countryside where ordinary people made extraordinary sacrifices to make America a reality.
Farmers and merchants became soldiers who marched and fought, often with little food and inadequate clothing. We are familiar with the dreadful winter at Valley Forge and George Washington’s surprise crossing of the Delaware River, but what makes those events stand out in the cause of freedom? Fortunately, we can learn more about these historical events at sites throughout southeastern Pennsylvania.

Though 1776 marked the year of the signing of the Declaration of Independence, it wasn’t a successful year for the George Washington and Continental Army. The ragtag group faced defeat after defeat. They were not able to equal Britain’s war-hardened military on the battlefield. Washington was forced to retreat to New Jersey after being outmaneuvered in the Battle of Long Island.

The army camped along the Delaware River in Trenton as the December cold took its toll on the troops. With morale sinking, Washington made a bold plan to cross the icy Delaware at night to attack Hessian troops stationed around Trenton. The plan called for two other brigades stationed south of his location to join Washington in the crossing. In the early evening hours of Christmas 1776, 2,400 soldiers set out to make the treacherous crossing. A heavy snowstorm made the endeavor so tricky that the two southern brigades had to go back to shore, leaving Washington’s troops to forge ahead. Early on Dec. 26, Washington and his men marched into Trenton, catching the Prussian soldiers by surprise, and earning a much-needed victory. Though not a huge triumph as far as engagement, it was a moral victory that reignited the cause after a series of defeats.

Today, the 500-acre park is home to a visitor’s center, a historic village with a blacksmith shop, a general store, and several landmark buildings.

Each December, visitors gather to watch a reenactment of Washington’s Crossing of the Delaware River. Hundreds of reenactors participate in the event. Visitors will have two opportunities to experience the crossing. The first reenactment will take place on Sunday, Dec. 12, from 10 a.m. to 4 p.m., with the actual crossing at 1 p.m. In addition, there will be colonial-era activities and demonstrations throughout the village. 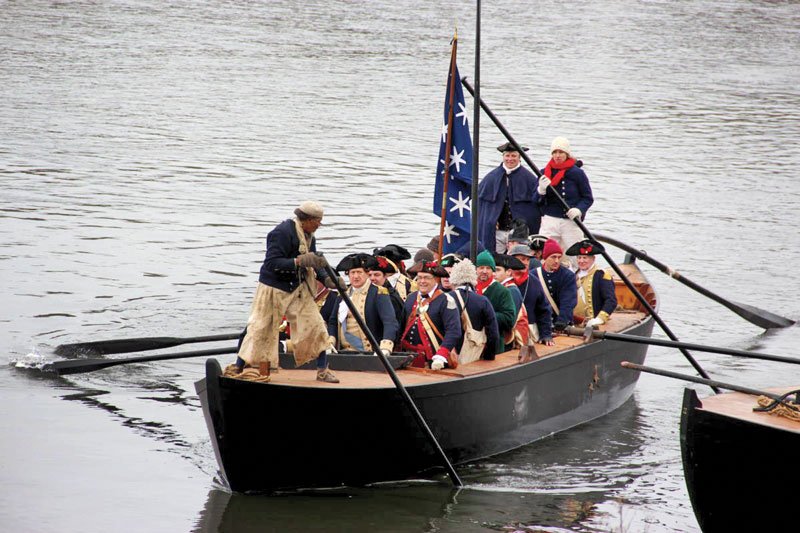 The Christmas Day Crossing is on Saturday, Dec. 25, 2021, from noon to 3 p.m., with the actual crossing at 1 p.m. Like the earlier event, there will be activities and demonstrations in the village.

With the intent to occupy Philadelphia, the formidable British army, led by General Howe, marched into Pennsylvania in September of 1777. George Washington set up his defenses along the Brandywine River in Chadds Ford as the British approached from the southwest. The Battle of Brandywine was the largest single-day engagement of the Revolutionary War. Although a loss for the Continental Army, it was a costly battle for the British. Washington’s resilience during the Philadelphia Campaign was one of the reasons the French decided to enter the war the following year. 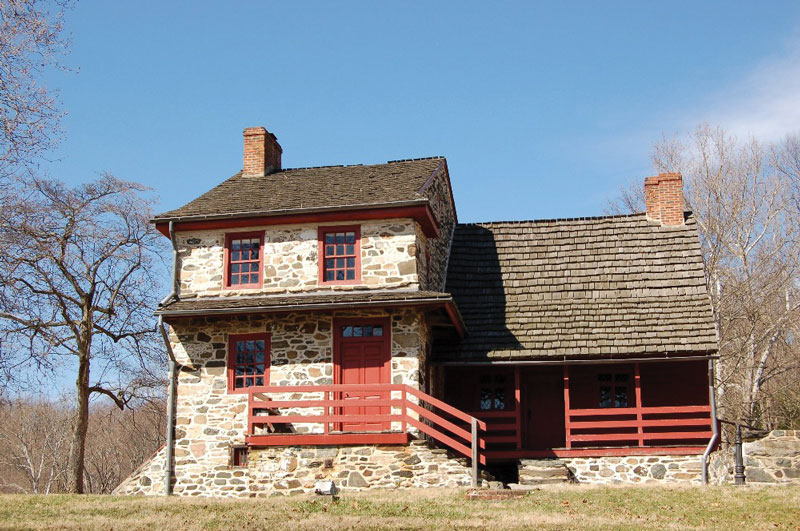 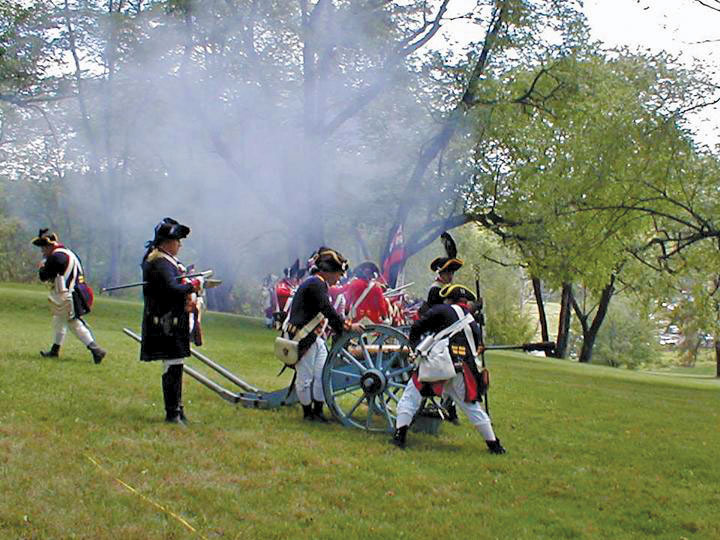 While Brandywine Battlefield Park is 52 acres, the entire battlefield covered roughly 35,000 acres or ten square miles. The Park is where Washington’s main encampment was located, including his headquarters in the Benjamin Ring House. Another historic property within the park is the Gideon Gilpin House. Visitors may tour both houses when there is a guide available.

On Dec. 19, 1777, 12,000 soldiers marched into Valley Forge. The six-month encampment offered the Continental army some much-needed rest. With both armies wintering, there was a break from the fighting. At Valley Forge, the battle they faced was a familiar one, hunger, lack of proper clothing, and disease. Nearly 2,000 people died at Valley Forge from illnesses such as typhoid and the flu.

Despite the challenges, the encampment at Valley Forge was a turning point for the cause of freedom. During this time, Washington was finally able to convince Congress to make changes to the system responsible for the supply shortages. 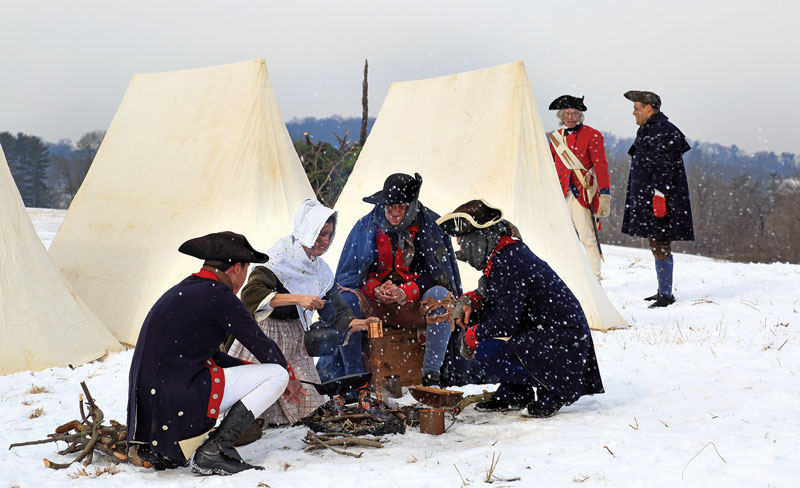 Photo by the National Park Service

Another positive outcome of the army’s encampment was the training they received from former Prussian officer Baron von Steuben. Under his direction, the soldiers learned military tactics and strategies, enabling them to work as a unified army. The soldiers who marched out of Valley Forge were more equipped with supplies and skill than when they arrived. 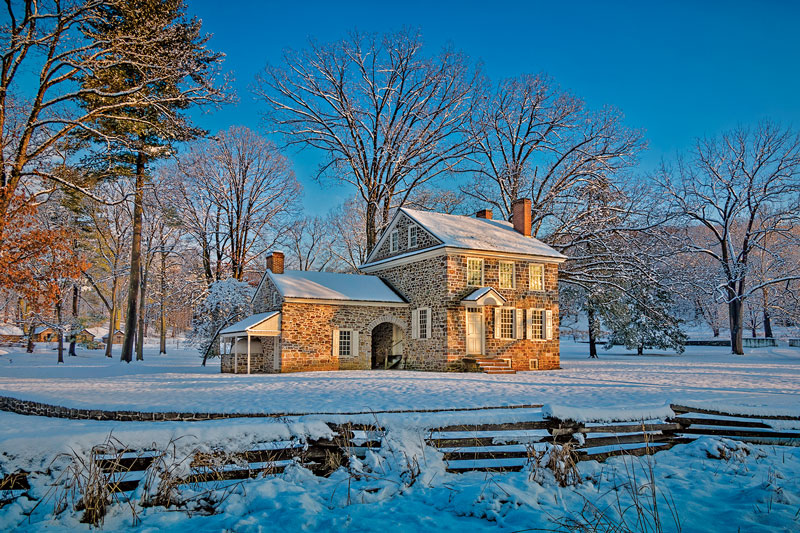 Today, you can visit Valley Forge National Historical Park seven days a week. The Park is open from 7 a.m. to 30 minutes after sunset, year-round. The Visitor Center at Valley Forge, which reopened this past summer after undergoing renovations, is open seven days a week, from 9 a.m. to 5 p.m. The visitor’s center is closed on Thanksgiving, Christmas, and New Year’s Day.

Washington’s Headquarters was closed indefinitely in September 2021 due to flood damage from post-tropical cyclone Ida.

Visit nps.gov/vafo for information on Weekend Living History and ranger-led talks, as well as other events at Valley Forge.