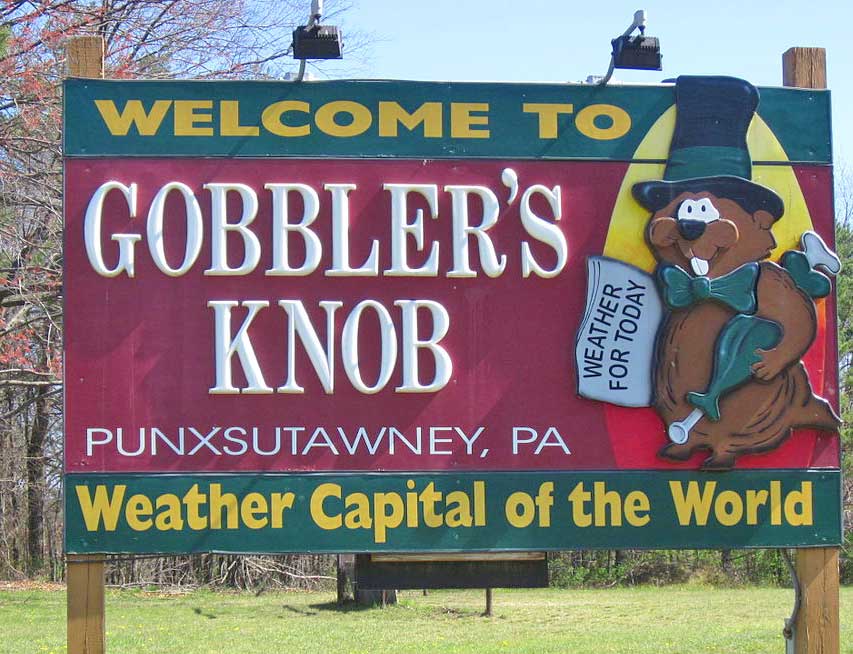 With Groundhog Day nearly upon us, I started thinking about the type of preparations that must go into the big event. It goes without saying that the small PA town of Punxsutawney is abuzz with activity. So, what does Phil do to prepare for his moment in the spotlight after being in hibernation for months?

I imagine there’s stretching, and plenty of it. Let’s face it Phil’s old, he’s been doing this since 1886. That makes him more than 130 years old! I’m quite sure those four legs don’t move without some coaxing, especially at 7:20 in the morning.

A few years back, I did an article on Groundhog Day for Where & When Pennsylvania and in the process learned some very thought-provoking things about Phil. He is one powerful woodchuck. First of all, Phil is always surrounded by his ever-vigilant Inner Circle. You will never see him without one of his handlers. To be very honest this secretive group of men in top hats creeps me out a bit.  Masons, Schmasons, I’d like to see Brad Meltzer try to crack the code on this bunch.  When I inquired how it is that Phil is well over 100 years old when the average groundhog only lives 7 years, I was met with every ridiculous theory from doubles to gene tampering.  It would be easier for me to believe that those dapper inner circle members just pulled a new hog out of their top hats every few years than what actually turned out to be reality. Here’s where it gets weird (er). Apparently, each summer, at the Groundhog Picnic Phil is given a ‘magical punch‘  that gives him seven more years of life. Holy cow! How long has Phil been on this stuff? This groundhog could be doomed to be a weather ‘man’ for eons! This is a crime against humanity (and animals). Who am I kidding here, Phil is powerless, it is the Inner Circle who holds all the cards.

Imagine how difficult it must be to keep this anti-aging potion a secret. How many times have rival clubs tried to infiltrate the Inner Circle just to get their hands on this stuff? The Slumbering Groundhog Lodge in Quarryville, Lancaster County would surely benefit by acquiring this juice. Slumbering groundhog my ear, Octoraro Orphie, is the product of a taxidermist! I have no idea how long he’s been dead but watching them march out each February 2nd carrying their stuffed prognosticator is just depressing.

And all this time I thought Phil lived an idyllic existence in his cute little stump in Gobbler’s Knob. It was only after digging below the surface that I realized that the darling 1993 film starring Bill Murray was little more than a fluff piece. It just goes to show how far his handlers will go to show Phil in the best light. Let’s see, he’s been on Oprah and had his prediction covered live on the Times Square jumbotron in addition to all the national press he gets every year.

It makes me wonder if Phil has a party affiliation because if he decided to run for office, he is one candidate that could honestly say he actually met Ronald Reagan. In 1986, he and some of his Inner Circle met with the 40th president. It wasn’t long after that visit that the “Cold War” ended. Did Phil predict that warmer days were ahead, or was he more directly involved in the thawing of icy relations between the U.S and the Soviet Union? We may never know the extent of his involvement but suffice it to say, the Inner Circle is happy to allow Reagan to take the credit.

Gobbler’s Knob is going to be a hotbed of underground activity this Groundhog Day. Whether it’s just a fun tradition in which we pull a groundhog out of his bed to predict the weather, or something more, is up to interpretation.