Yesterday I was in the self check-out line at the grocery store when I overheard a young man say something to his friend that completely floored me! They were discussing their plans to go to see fireworks next week. One of the guys said, “Don’t you think it’s weird that we have a holiday that’s named after a date?” To which his companion replied, “Dude, it’s supposed to be called Independence Day!” In guy number one’s defense, he did seem to recall the reason we have off on the Fourth of July immediately after his friend pointed it out to him. But, it got me thinking. Have we put so much emphasis on the celebration that we’ve forgotten why we celebrate?

Where I live in Pennsylvania, it’s just a 2-hour drive to Philadelphia, where so much of America’s struggle for independence took place. Even towns like Valley Forge, York, Allentown, Lititz, Reading and Paoli are indelibly marked with the birth pains of our nation.

The Moravian Cemetery in Lititz, Lancaster County, holds the remains of Revolutionary War soldiers. From December 19, 1777 to August 28, 1778, the Brothers’ House of the Moravian settlement was commandeered by General Washington and used as a military hospital. In all, 110 men lost their lives here and many were still children under the age of eighteen. For those young men alone, we must never forget why we celebrate on the Fourth of July.

So, when all the barbecues and fireworks have been extinguished, I hope the fire of freedom and independence still burns inside each one of us. 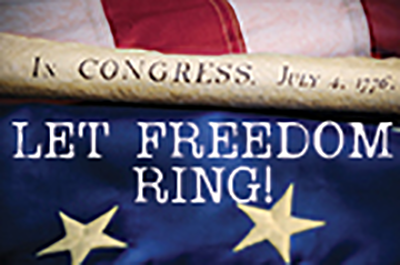