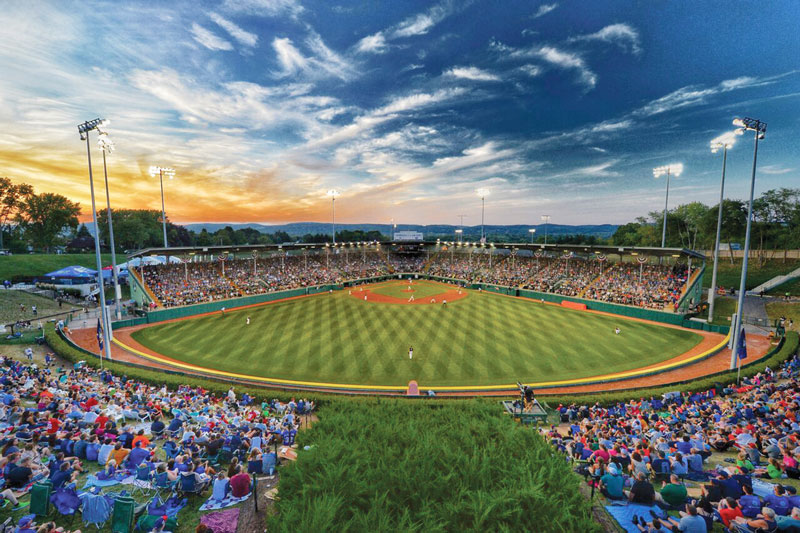 The Little League Baseball World Series (LLBWS) will celebrate its 75th anniversary on August 17-28 by returning with a full participant field and fans in the stands! The iconic series will take place at the Little League Complex in South Williamsport.

In 1947, when the first Little League World Series was played, the Maynard Midgets, from the Williamsport area, won the series where all but one team was from Pennsylvania. At the time, only Pennsylvania and New Jersey had Little League teams.

Though they often come from very different backgrounds, Little Leaguers have one thing in common – the love of the game. Today, the culmination of the Little League season is when the top 16 teams worldwide compete in the LLBWS. In honor of the diamond anniversary, Little League will feature twenty “Diamond Moments” to spotlight memorable highlights and milestones from the past 75 years. “Diamond Moments” will be featured on littleleague.org in the months leading up to the iconic series.

Hat’s-off to organizers who have kept the LLBWS an affordable and enjoyable experience. For about $30, a family of four can attend a game (no charge for admission or parking), buy a souvenir program, and enjoy a hotdog, French fries, and soda!

The Little League Grand Slam Parade will take place on Monday, Aug. 15, at 5:30 p.m., and travel along Fourth Street in downtown Williamsport. For events and things to do during the LLBWS, visit littleleague.org or visitlycomingcounty.com.

An excursion to the Little League World Series would not be complete without stopping at the World of Little League®: Peter J. McGovern Museum. Visitors will find more than 300 artifacts and interactive exhibits, including the interactive Global Connections Touch Table. 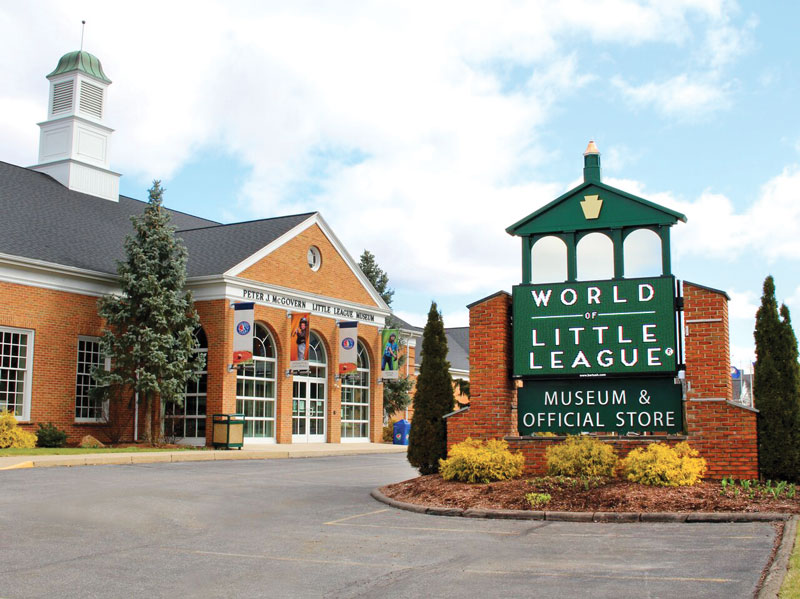 The museum’s Hall of Excellence displays artifacts of past Little Leaguers who have demonstrated a commitment to excellence in their chosen profession and personify the values learned as children in Little League. Some of the recipients of this honor are George W. Bush, Kevin Costner, and Bruce Springsteen. Recipients don’t need to be famous; preferably, they need to set an example for children by their actions, like firefighter Michael Cammarata.

There is an admission fee to tour the World of Little League Museum, but it is free for children under age 3, military personnel, and current Little Leaguers®, who wear a team shirt or jersey that has the Little League® official patch on it. The museum is open from 9 a.m. to 4 p.m on Saturday and Sunday. Check littleleague.org/world-of-little-league for more information. 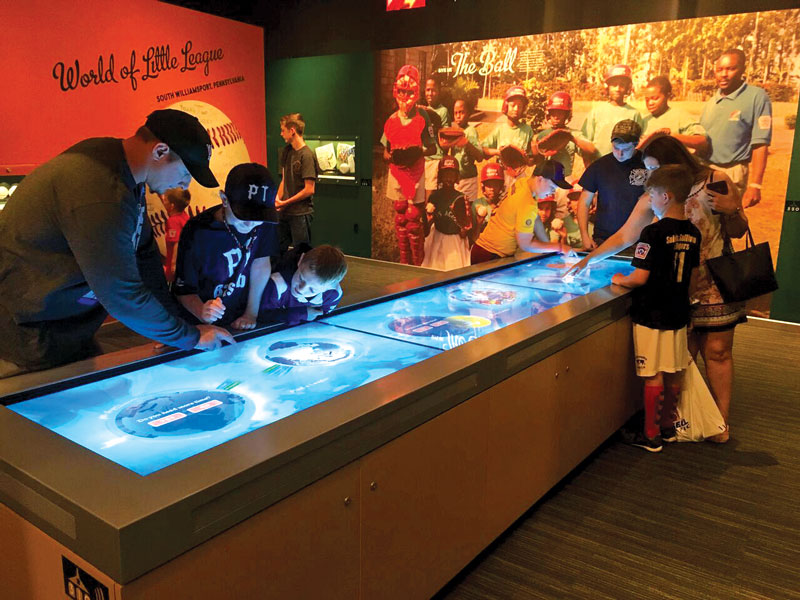 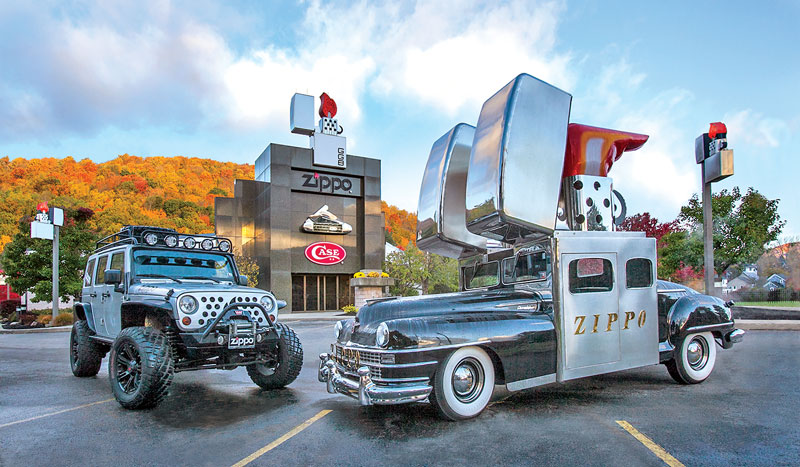 In 1932, George G. Blaisdell designed the Zippo lighter after observing someone use a lighter under windy conditions. Although Blaisdell felt that the lighter could handle the wind, the design of the lighter itself was bulky and required two hands to use. His construction was the small, sleek iconic design that has held up for nine decades. In addition to the design of the lighter, the name was Blaisdell’s idea. He liked the sound of the word “zipper” but settled on the name Zippo.

In 1941, when the United States entered World War II, Zippo stopped manufacturing the lighters for consumers due to significant demand from the military. The use of the lighters in the European and Asian theaters of the war led to international popularity for Zippo.

Blaisdell passed away in 1978, leaving the business to his daughters. The company stayed in the family until 1993, when Bradford-based W.R. Case & Sons Cutlery Company purchased Zippo. Like Zippo, Case has a rich heritage that began in 1889. Case is known for its hand-crafted knives, including the folded pocket knife.

Zippo’s 90th anniversary is just one of the company’s milestones being recognized this year. In July, the Zippo/Case Museum & Flagship Store in Bradford will celebrate its 25th anniversary. Every day, the 15,000-square-foot museum welcomes collectors and fans of the two iconic brands from across the globe. The museum and store are open Monday through Saturday, 9 a.m. to 5 p.m., and Sunday, 11 a.m. to 4 p.m. 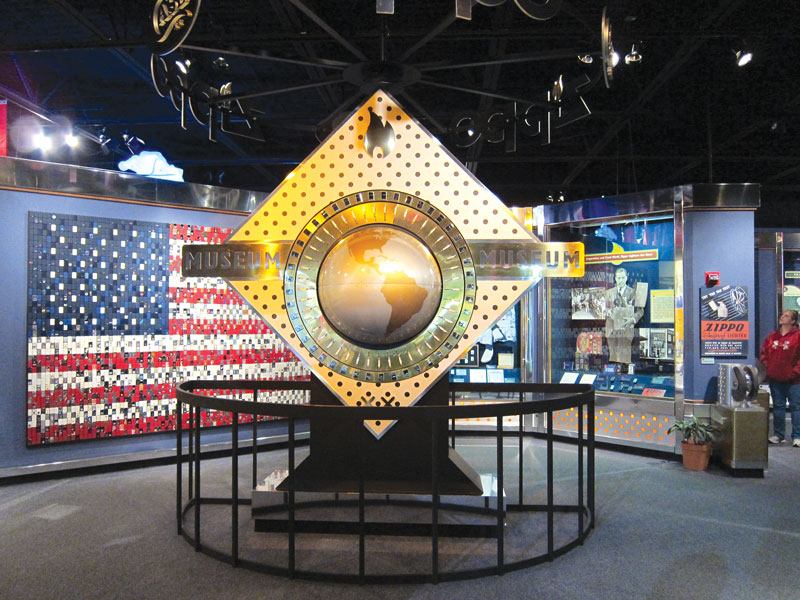 The flag mosaic in the Zippo/Case Museum visitor’s center is made up of 3,393 Zippo lighters | Photo courtesy of Allegheny National Forest Visitors Bureau