How Pittsburgh Steel, the Johnstown Flood and Some Fortuitous Geology Created One of Pennsylvania’s Premier Day Hikes. 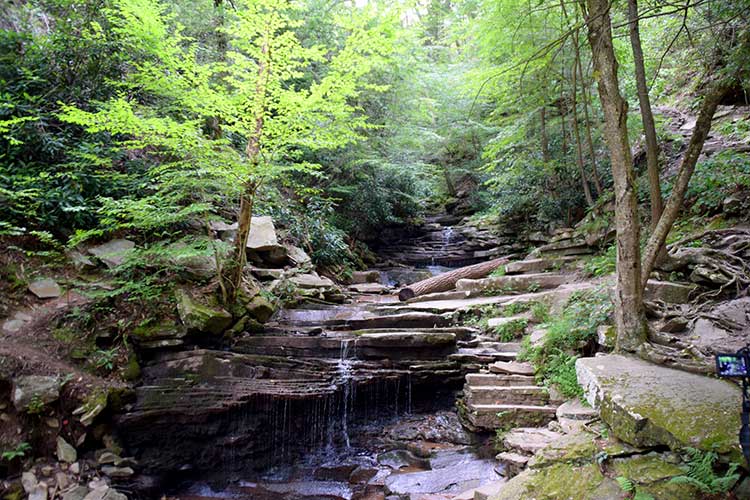 From the sky, the mountains of central Pennsylvania look as if their layout was scribbled by an exuberant child. The long expanses of trees on ridgetops zig zag northeast and southwest, separating long, narrow valleys strewn with small farms and communities. Just east from the distinctive serpent shape of Raystown Lake, there’s a conspicuous break in the Jack’s Mountain ridgeline, a horizontal cut directly across the ridge. Jack’s Narrows, as the water gap is called, is a bottleneck on the great east-west concourse of the state, the only route in the days before I-76 and I-80. It is here, in the dark confluence of mountains that gave nearby Mount Union its name, that you’ll find Pennsylvania’s Thousand Steps. Besides being a terrific roadside hike, these historic steps represent Pennsylvania’s industrial past and rewilding present. 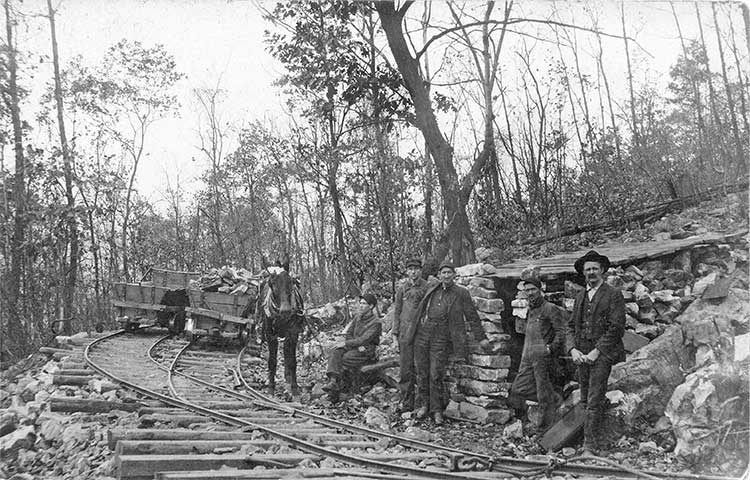 The most prominent feature of the hike is the eponymous sandstone steps, which are nestled so naturally in the fall line that it’s tempting to imagine they grew right out of the mountain that way. The steps ascend from the gravel culvert on Route 22 to just below the top of the mountain. They wind through fragrant stands of jack pine, a vestige of an industrial past, and provide order in chaotic talus piles as they snake through the pastel-hued rocks. There are actually 1,043 steps in all, and as you huff and puff your way up, you can’t help but wonder: Why are they here?

In the early 20th century, the sandstone that comprises the steps generated a small but significant industrial era in Mount Union. Central Pennsylvania’s gift to the industrial age was its high-quality and accessible natural resources. Virgin timbers grew on uniform mountain ridges, punctuated by glacial floes of sandstone, streaming from the tops of ridges like their icy counterparts. The rocks, themselves evidence of an ancient, shallow seabed, lay bleached and broken by millennia of exposure to the elements. Their slow but perpetual motion prevented the growth of any moss, or any vegetation at all, atop the proverbial rolling stone. The natural bleaching removed impurities from the silica and quartzite components of the rock, the fracturing making extraction as easy as picking up a small boulder and putting it in a cart. The rock is known as ganister, and ganister brick was the choice insulator for steel kilns in the early 1900s. The floes exposed along the Juniata River at Jack’s Narrows were the highest-quality and most accessible source in the state. 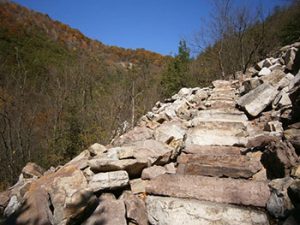 The steep steps gain 800 feet of elevation in just 0.4 miles of trail. They change direction several times where they intersect with overgrown rail inclines, and these landings provide welcome space for hikers to rest off-trail. Today, birches grow six inches thick along the grades. Less than 70 years ago, however, you would have needed to pause at these intersections to allow the dinky carts to creep by on their steel cables. These were the kind of heavy wooden mining carts you see in Indiana Jones films, “dinky” referring to the variety of small steam engine that would power the carts up and down the narrow-gauge rails.

For the first 20 years the Harbison-Walker Refractories Company quarried Jack’s Mountain, workers trudged up the dinky inclines to their worksite as the immensely heavy carts passed. The carts’ speed was controlled by a steel cable wrapped around a spool at the dinky house, a stone structure that still stands at the top of the mountain. Some workers would ride in the carts, a practice that killed at least two. This ended when the flood of March 1936 (also known as the St. Patrick’s Flood or Johnstown Flood) wiped out key mining infrastructure along the river. To keep workers occupied during the rerouting of the mine cart tracks, foremen commissioned a series of steps that would facilitate safer (but no less difficult) travel to and from the worksite.

Sleepy Mount Union had been unprepared for the (occasionally literal) explosion of industry in the early 1900s. The First World War brought high demand for munitions from the Aetna Explosives Company in adjacent Kistler, and the town’s three silica brick companies quickly became the global hub of the silica brick industry. Mount Union bricks were shipped worldwide in the first half of the century. Companies recruited southern blacks, along with Irish, Italian and Eastern European immigrants, to fill the labor shortages. For these minority populations, the work in Mount Union was difficult and dangerous, but frequently the only well-paying opportunity available to them. Many came to Mount Union on a free one-way ticket from the company’s recruiter and sent for their families soon after. If a couple was childless, the wife might find work at the sewing factory in town.

The silica companies were reported to be less predatory than other notorious industries of the time. Workers were paid in cash, not credit, and could live in company homes during their tenure with the industry. It was still hand-to-mouth living, and aspirations were immediate: feeding, clothing, and warming the family. Saving money was unthinkable. Each Harbison-Walker quarryman would wake before dawn and walk the 3 miles from Mount Union to the steps along the recently paved Route 22. The workers toted their thick rubber gloves, wire brush, and 16-pound sledge up the Thousand Steps (in case you thought your day pack was heavy!) and work until they’d loaded six tons of ganister apiece. Rain or shine, every day except Sunday, the dinky carts would run. In the most extreme storms, the men sheltered in the stone dinky house or blacksmith’s shop on top of the mountain.

And so the decades passed. A Sisyphean trail of human ants crept into the hills of Jack’s Narrows on rough-hewn sandstone steps to peel away a layer of mountain, by hand. Hundreds of miles away, the workers of Pittsburgh would climb the iconic steps of their hillside communities to the steel kilns lined with ganister brick and replenish the gleaming silver highway that connected the wilds of Northern Appalachia. 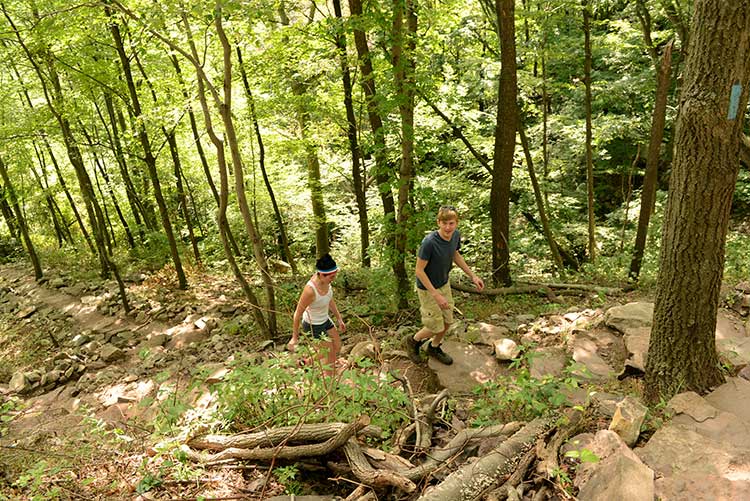 Today, in the downtowns of Mount Union and Huntingdon, you’ll find the industrial chapter of the area’s history visible in the architectural flourishes of an optimistic era. The golden tower of the Russian Orthodox church gleams in the Flats of Mount Union, built by immigrants in the neighborhood that mostly consisted of shanties and company homes in its most populous days. Historically black churches can be found around the corner, still standing amidst so many vacant lots. The nearby village of Kistler was designed specifically to encourage community engagement with the cultural assimilation of foreign workers in mind. A cruise through Kistler today evokes the inviting and walking-scale feel the designer intended, although homeowners have since differentiated their once-uniform homes with bright colors and additions.

The views from the summit of the Thousand Steps are greener than they were during the peak of quarrying. Trees have filled in old clear cuts and obscure the thin scars of defunct rail lines. At the top of the steps, you can take the trail to the right just 0.3 miles to see Mount Union, smaller and less smoky than it was in its heyday. The half-mile spur to the Ledge Quarry features views of the borough of Mapleton. The Mill Creek Quarry delivers a fantastic view of Huntingdon from 2.7 miles north. The Thousand Steps and these overlooks are part of the 84-mile Standing Stone Trail, which connects the Mid-State Trail in the north to the Tuscarora Trail in the south and was once the candidate for an Appalachian Trail reroute. The truly ambitious can hike for days from the Steps!

It’s easy to contemplate the passage of time from atop the shell of the dinky house. The displaced ganister sandstone is now found worldwide and in space: The high-quality silica from Jack’s Narrows was used to create the Palo Alto telescope and the Hubble Space Telescope. Imagine a quarryman’s reaction if he were to see Jack’s Narrows today. When the steps were built in 1936, it would still be decades before the automobile replaced the train in the Juniata River Valley. And the throngs of families, walking the quarry steps – for fun? Visitors to the area today enjoy a level of recreation and leisure unfathomable to a Harbison-Walker quarryman, but the spring at the top of the mountain still provides water for visitors as it did the workers so many years ago.

In Pennsylvania, we play on the industrial skeleton of our region’s past. A walk on the Thousand Steps evokes a meditation on the past and future of this uniquely beautiful region. 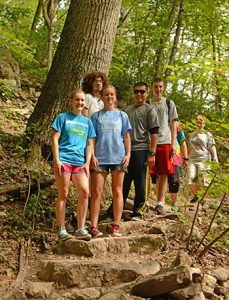 Today, hiking trails lace the ridgetops of Jack’s Narrows and the surrounding ridges. Many of the ridgetops are state-owned game lands and forest and host a variety of hunting, hiking, biking, climbing and skiing visitors year-round.

World-class mountain biking is nearby on the Allegrippis trail network alongside Raystown Lake.

The ever-popular Lower Trail, a gravel rail trail, leads cyclists along the Frankstown Branch of the Juniata along the route of the historic Mainline Canal towpath. In the future, the Mainline Canal Greenway and 9/11 Memorial trail bike path will connect the Lower Trail in the north to Jacks Narrows, and down along the Juniata to Lewistown and beyond.

The tributaries and main trunk of the Juniata River are excellent for flatwater paddling. Float Jack’s Narrows itself while making use of the new boat launches in Mapleton and Mount Union. Other water adventures await on nearby Raystown Lake. Click here for more information on the Raystown Lake area.