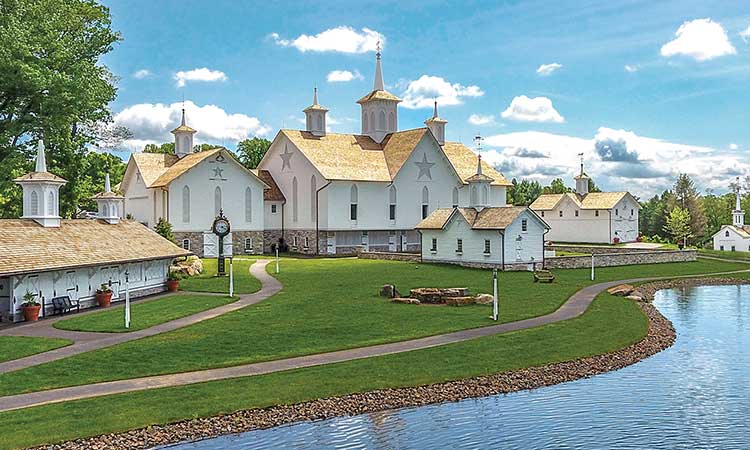 It was a sunny, late-summer day when I met David Abel at his property in Elizabethtown. I’d been anticipating finally seeing the iconic Star Barn that now stood majestically on the grounds of Stone Gables Estate. I expected to learn about the meticulous process that went into dismantling, relocating and reassembling the structure that I had seen so many times as I traveled along Route 283 in Dauphin County. I knew that I was going to be awestruck at the craftsmanship that went into restoring it to its original grandeur. It was as I expected, and so much more. What you see on the property is just part of the story. It’s the purpose behind it all that impacted me the most.

More Than Just an Iconic Building

The Gothic Revival Star Barn was built in 1877 and was the centerpiece of a complex of smaller buildings on the 164-acre John Motter farm. The louvered five-pointed stars used for ventilation, which have given the structure its name, also made it one of the most photographed barns in the country. But it wasn’t until it caught the attention of Tierney Abel, David’s wife, that the rundown structure was given a new lease on life.

“We were driving along Route 283 when my wife said, ‘Sweetheart, we should save the Star Barn,’” David recalled. He was hesitant at first, but the rest is history. 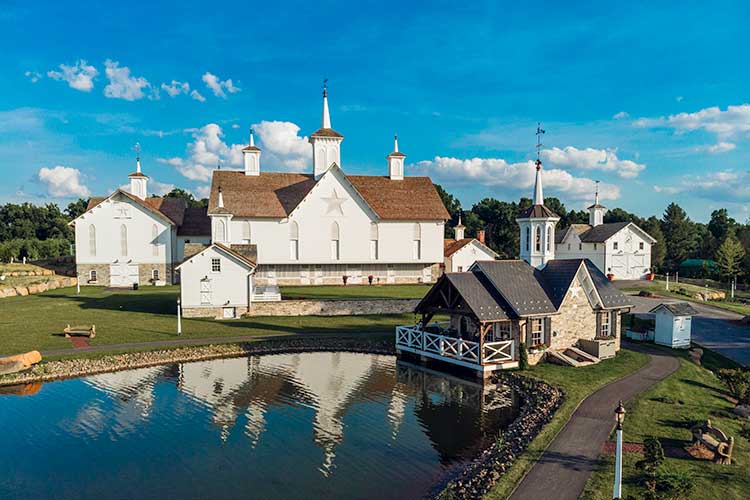 It took two years for a team of experts and craftsmen to bring the beauty back. While the exterior of the Star Barn captures spectators’ attention, the interior is a masterpiece of painstaking devotion. The first thing I noticed when I stepped inside were the 65-foot-long white oak beams that bear the weight of the barn. These massive summer beams are original to the barn, as is 85 percent of the wood. Timber that could not be saved was replaced with wood from period-correct barns purchased by the Abels. 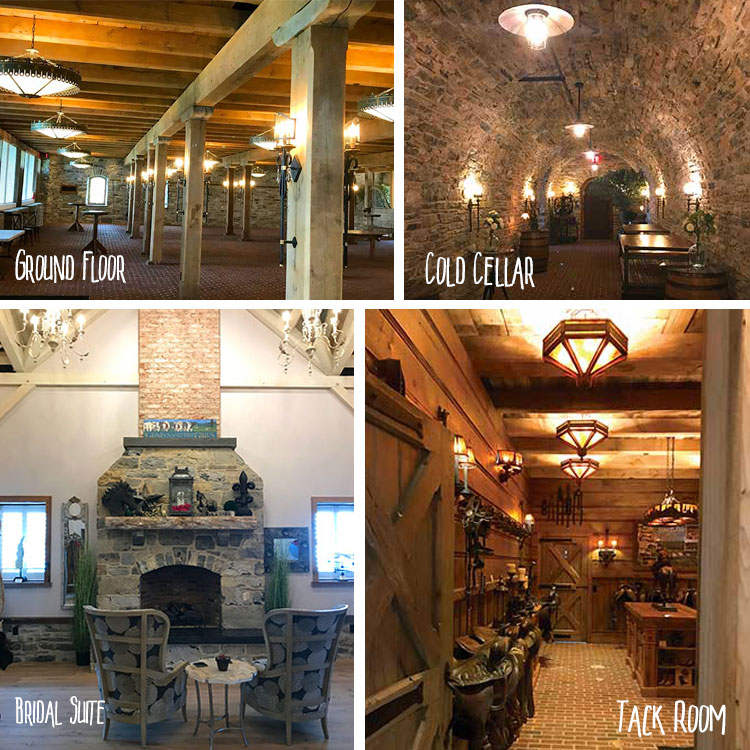 The task of keeping the building authentic and making it ADA compliant was quite the undertaking, but now the structure features handicapped-accessible bathrooms and an elevator to reach the second floor.

The first-floor tack room – David credits Tierney as its decorator – has a masculine, refined Western feel. Also, on the first floor, Tierney transformed the Milking Parlor into a beautiful bridal suite complete with a stone fireplace.

The original hay barn was relocated and attached to the main barn so that all ADA requirements were met for both barns. The “addition” houses a groom’s quarters and the Star Barn museum, which showcases a replica of the Star Barn complex and antique farming tools and implements.

My favorite room in the Star Barn is the 56-foot-long cold cellar. The 10-foot-high arched tunnel room was rebuilt stone by stone from the original limestone. The intimate setting is perfect for wine tastings and dinners. Just as stunning as the stonework in the cold cellar is what’s just beyond the massive wood and iron door leading outside (opposite). The Star Barn’s Sunken Garden is a hidden retreat that made me feel as though I were Dorothy stepping into the Land of Oz for the first time. 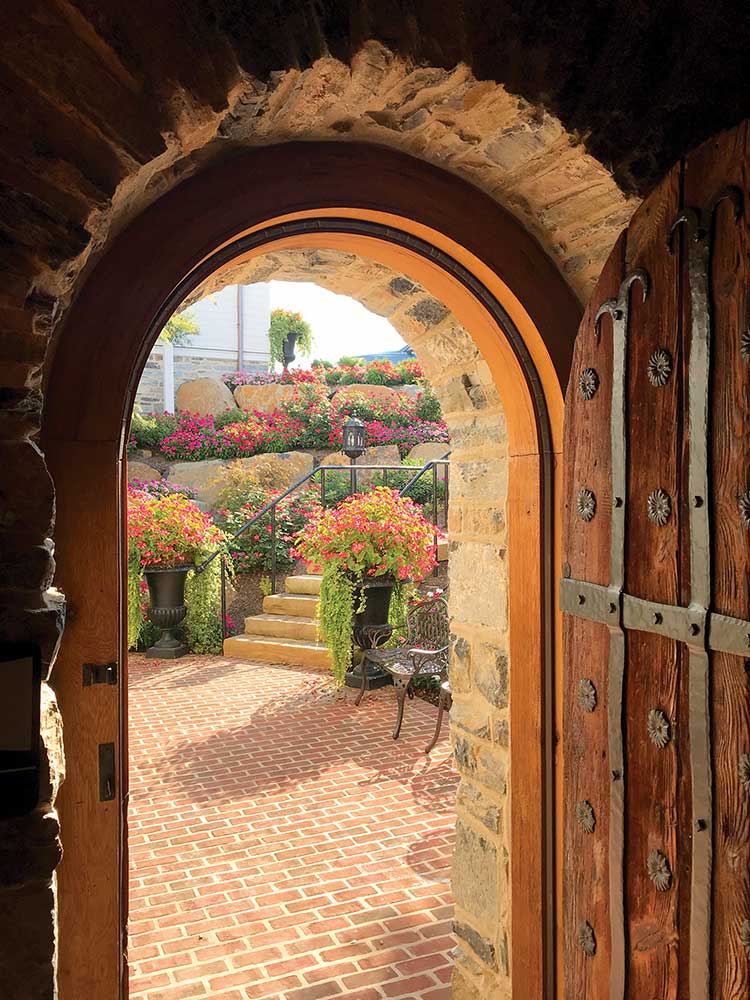 Back inside, the Grand Staircase leads to the main floor, which features an inside view of the star louvers and the massive 24,000-pound center cupola. The open space of the main floor is where many of the weddings and receptions take place. As with all bank barns, you can walk outside and still be on the ground, even though you’re on the second floor of the barn. The mezzanine overlooking the main floor affords an even greater vantage point of the cupola and the grandness of the barn itself. 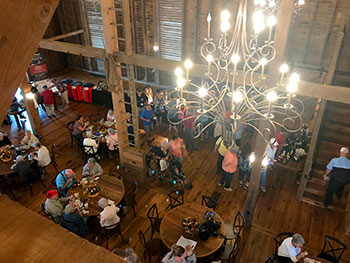 In all, Star Barn Village includes nine buildings that were part of the original farm. The bucolic setting hosts weddings, reunions and church and corporate events throughout the year. The entire village is just lovely to walk through. From the incredible reconstructed buildings and one-acre Lake Liberty to the gazebos, solarium and vineyard, the experience is very serene.

Events With a Purpose

While the tour far exceeded my expectations, it was our sit-down conversation afterward that moved me beyond dates, specs and architecture. The vision, mission and purpose behind all of the endeavors at Stone Gables is to preserve the rich history of the area while making a difference in the lives of at-risk children. When explaining his mission, David explained, “I believe we’re just stewards of this property. God has preserved them for such a time as this.” 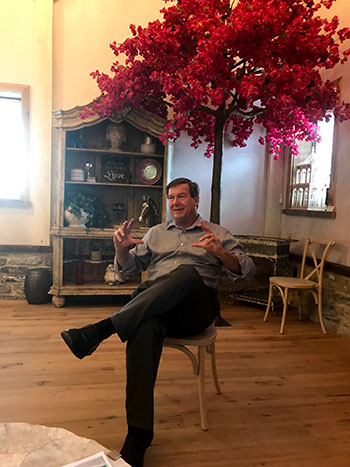 When David purchased the Stone Gables Estate in 1986, it was a place where he could foresee raising his growing family. Today, the Stone Gables Estate has expanded to 275 acres, which includes the Iron Stone Ranch – a working horse farm, Star Barn Village and the Belmont site (under construction). One hundred percent of the net profits raised through events and services provided at the property go to a cause near and dear to David’s heart: Brittany’s Hope, a nonprofit organization dedicated to helping at-risk children through adoption. All of the net profits go to orphan care and providing adoption grants. More than 770 children have been given the gift of a forever home and family through Brittany’s Hope.

The organization was founded in 1999 after David’s first adopted daughter, Brittany, died in a tragic car accident. It was her life that inspired the Abels to found Brittany’s Hope. As Brittany matured into a young woman, her passion for helping abandoned children became more and more evident. Her words helped shape the mission statement for the organization:

“I dream of a world where all children know peace and love only a family can provide.” -Brittany

Over the years, 14 children have become part of the Abel family through adoption. Some of the Abel children have gone on to adopt. Like any proud father, David beamed as he shared, “They’ve experienced the beauty of the gift, and they want to share that.”

Just days after my visit, David announced that he purchased The National Christmas Center. After it closed in 2017, owner Jim Morrison was hoping to find a buyer for the extensive Christmas collection. I can’t imagine a better outcome for The National Christmas Center than to be housed at the future Belmont Site at Stone Gables Estate. When I ran into Morrison, a.k.a. Santa Jr., in the fall, he said, “When I spoke to him (David Abel), I knew this was where (the collection) belonged.”

The Barns at Belmont

This three-year project is already underway and will bring to life the four-and-a-half-story 1867 Belmont Barn. The barn was slated for demolition to make way for a shopping center along Fruitville Pike in Lancaster when the Abels purchased it. The Belmont site at Stone Gables will eventually house the Leviathan 4-4-0 Steam Engine and the only reproduction of the original Lincoln Funeral Car. The Belmont Barn will be able to seat more than 500 guests for weddings and corporate events.

In April of 1865, a steam locomotive chugged through the center of the land that is now Stone Gables Estate. The train was pulling the funeral car of Abraham Lincoln from Washington, D.C., to Springfield, Ill. Just over a half mile of that original 1832 railroad bed is still on the property.

The double-span, double-arch covered bridge, which extended across the Pequea Creek since 1844, was in desperate need of restoration when it was purchased for $1 and moved to Stone Gables. The restoration will be completed in two parts. The first section will be rebuilt to its original glory for vehicle and horse and carriage traffic crossing a creek on the property. That should be completed by Saturday, March 30, 2019. The second part is scheduled to be completed in 2022 and will span another portion of the creek to allow the Steam Locomotive and passenger cars to cross the creek. The public opening of the first part of the project will be at the Lincoln Funeral Train re-enactment.

The property is not open to the public, but you can the see the preserved treasures at Stone Gables Estate by attending one of its events or by booking an equestrian experience at Iron Stone Ranch.

Monday and Tuesday, April 22 and 23: Abraham Lincoln Funeral Train. The first-ever re-enactment on the 154th anniversary. The event includes the full-scale replica of the locomotive, funeral car and coffin, as well as the original railbed, period-correct band and music, re-enactors in period dress and living history lectures by Abraham Lincoln presenter Fritz Klein and others. Plus, tours of the Star Barn, Ironstone Ranch and more.

Dates are yet to be determined for the Summer Festival and Harvest Fest.

If you ask David Abel why he restores broken-down buildings, he’ll tell you that he wants to preserve the history and honor the master craftsmen who built them. I think it’s more than that. I don’t believe there’s such a thing as a hopeless cause to David Abel, whether it be a barn on the brink of collapse or a child living an unfathomable existence. 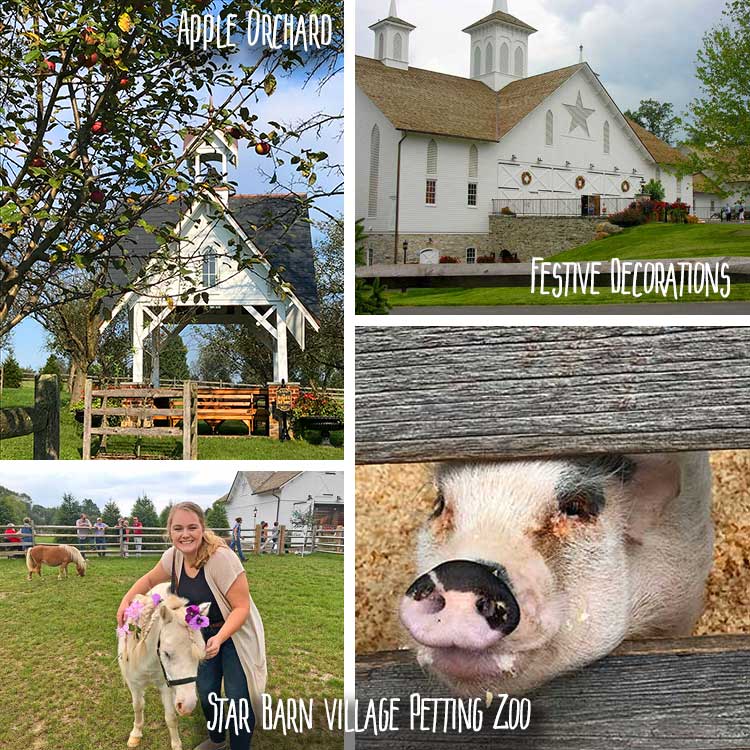 For more information on Star Barn Village at Stone Gables Estate log on to thestarbarn.com