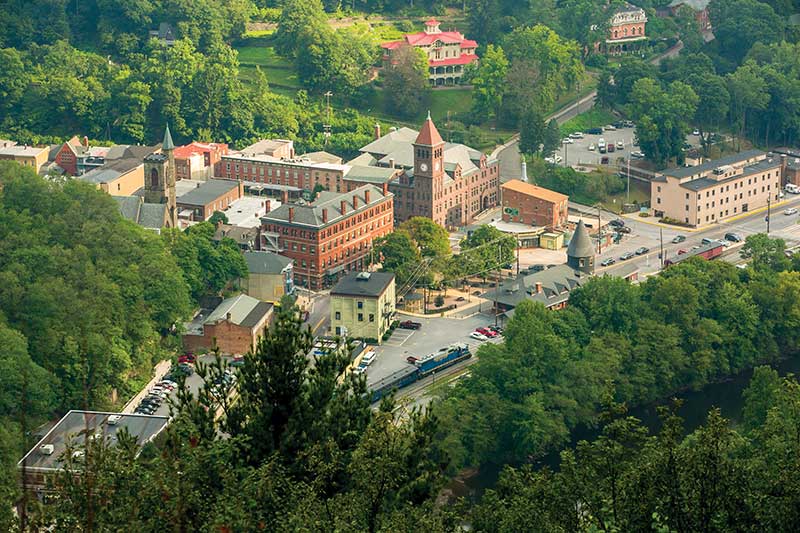 With a storied past, the quaint charms of a European village and the outdoor recreation of a mountain sports destination, the town of Jim Thorpe is a must-see town tucked into the Pocono Mountains. Originally known as Mauch Chunk, Jim Thorpe is a destination rich with history and is often called the “Switzerland of America” because of its scenic views and charm. Its unique Victorian architecture pays homage to its roots of coal mining and industrialism, and today those Victorian structures house unique shops and eateries, museums and galleries and popular entertainment venues. With nostalgic charm coupled with unique history and exciting recreation, Jim Thorpe is a favorite for weekend getaways for many types of travelers.

But to truly understand Jim Thorpe’s charm, one must first look at its roots. Originally named Mauch Chunk, the town was pivotal to America’s industrial development as a main transport area for coal mining. The coal mined throughout what’s now known as the Pocono Mountains was transported from Mauch Chunk to eastern markets via the Lehigh River, which helped to build the local economy and establish the community as an independent leader in a growing industrial market. Many of the transportation systems of the era, including canals, locks, dams and early gravity railroads, are still a strong part of the community’s culture today.

That focus on coal and modern transportation methods brought early 19th-century entrepreneurs to the area, including Asa Packer, a Connecticut native and carpenter by trade. Packer realized the opportunity the coal region held and used his skills to build and repair canal boats to transport coal, eventually establishing the firm of A. & R. W. Packer, which built canal boats and locks for the Lehigh Coal & Navigation Company. Packer and his family settled in Mauch Chunk.

But Packer’s sights were set even higher on finding ways to use technology to transport the region’s rich coal resources. In the mid-1850s, Packer took control of a railway line from Mauch Chunk to Easton and connected railway lines to the coal mines in Luzerne and Schuylkill counties. Known as the Lehigh Valley Railroad Company, the line eventually extended into the Susquehanna Valley and New York state to connect with the Erie Railroad, effectively growing the region’s industrial reach even further and establishing Mauch Chunk as a center of industrial commerce, tourism and entertainment. 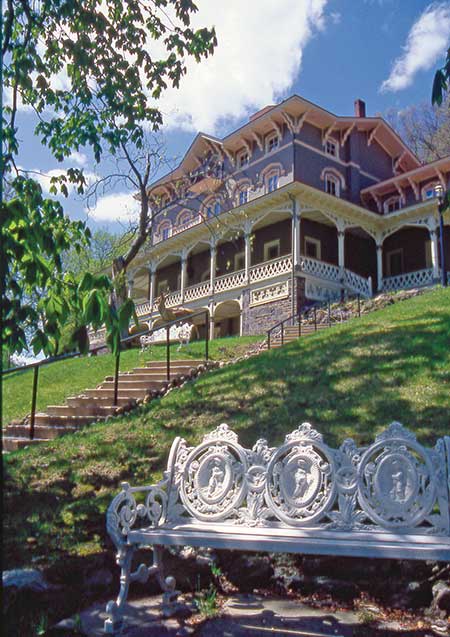 Today, visitors can experience a glimpse of Packer’s success with a visit to the Asa Packer Mansion (shown), a National Historic Landmark that overlooks the Lehigh River and Mauch Chunk National Historic District and that remains much like it did when first constructed in 1861 as a memorial to Packer and his accomplishments. Visitors can learn more about Packer’s successes as a businessman and his work as a philanthropist through guided tours held throughout the day of the 17-room Italianate villa.

Visitors can also experience a little of what it was really like to live as a Packer with a stay at the Harry Packer Mansion Inn, just down the street from the Asa Packer Mansion. Harry Packer, the elder Packer’s son, lived in the Victorian mansion, complete with 15-foot ceilings, marble fireplaces and gilded mirrors reflecting the elegance of the Victorian age. Guests can enjoy period furnishings and artwork at the inn and even take part in special wine tasting or murder mystery weekends, a nod to the fact that the home was the inspiration for Walt Disney World’s “Haunted Mansion.”

By the middle of the 20th century, Mauch Chunk had fallen on hard economic times. In the 1950s, the town was approached by the widow of Olympic athlete Jim Thorpe, looking for a place to honor her late husband and his sports achievements. (His home state of Oklahoma had refused to erect a memorial in his honor.) She and town officials struck a deal, and the athlete’s remains were moved to Mauch Chunk, which was then renamed Jim Thorpe. Each year, the town has a two-day event to honor the athlete who excelled in track and field, football and baseball. Interestingly, Thorpe himself never visited the town, but reports say he did start his athletic career at an industrial school about 100 miles away.

Today, visitors have plenty of opportunities to learn more about the Packers, the railroading history and the unique stories of Jim Thorpe. Take a self-guided walking tour or Segway tour to learn more about some of the historic downtown, or hop aboard the Lehigh Gorge Scenic Railway, an excellent way to explore the region from the viewpoint of its industrial history. Visit the Mauch Chunk Museum and Cultural Center to learn more about the town’s history, where there’s even a working model of the Switchback Railroad, one of the very earliest in the region. 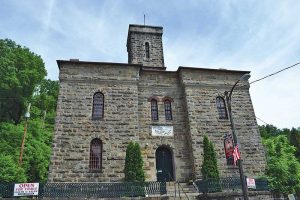 The railroading history, the Packers’ story and the eccentric tale of the name change of Jim Thorpe aren’t where the historical stories end, however. Don’t miss the Old Jail Museum in Jim Thorpe, considered the central location for the story of the Molly Maguires. Here, visitors can tour the jail and hanging site of the seven accused coal miners known as the Mollies in the 1870s, complete reconstructed gallows and the mysterious, enduring handprint of a prisoner who proclaimed his innocence. 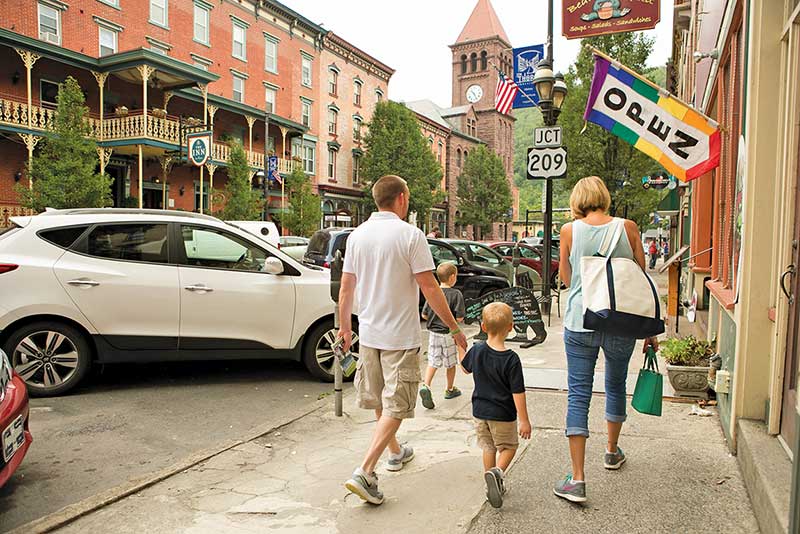 Even just a stroll through downtown from one of Jim Thorpe’s quaint B&Bs or historic inns evokes nostalgic charm. Pass by Historic Stone Row, a series of stone row houses Asa Packer built for his engineers and foremen of the Lehigh Valley Railroad, to find Victorian buildings along Broadway now housing cute shops offering everything from handmade soaps and pottery to wine tasting rooms, antiques and art galleries. Don’t miss Somersault Letterpress, a vintage letterpress shoppe, or Rainbow’s End, a quaint corner candy shop sure to amaze kids (and kids at heart).

Dining is just as varied. While shopping downtown, stop by Café Arielle at the Stabin Museum, a destination restaurant housed in an old wireworks factory and silk mill, complete with an underground stream and outdoor garden patio. The popular Broadway Grille & Pub is a favorite for locals and visitors, and Stella’s Secret Speakeasy above Tony Stella’s Encore restaurant is the perfect place for an evening cocktail – just make sure you know the password.

Outdoors enthusiasts can enjoy an entirely different aspect of Jim Thorpe, no matter what the season. After all, the many railways and waterways of the area’s storied past make for excellent outdoor recreation today. Take a 9-mile downhill bike trip on the Switchback Trail to the picturesque Broadway in downtown Jim Thorpe. Bike or hike through the Lehigh Gorge Rail Trail for some truly spectacular scenery, or visit any of the numerous local trailheads accessible from town. Take to the water for a challenging whitewater rafting ride or take a scenic kayak paddle through the gorge and surrounding waterways. Several companies are available to arrange tours to explore the region’s waters. Naturalists may want to spend a relaxing afternoon at the Bear Mountain Butterfly Sanctuary.

Romantic small-town charm, entrepreneurship, legendary pasts and scenic vistas all make their home in the Pocono Mountains’ Jim Thorpe. Discover this unique spot for a weekend getaway in the Switzerland of America. Visit www.jimthorpe.org or the Pocono Mountains Visitors Bureau website for more information.

Note: some of the attractions mentioned in the article aren’t open until later in the Spring. Please check websites for days and hours of operation.