The 20th Anniversary Celebration Reprise: The Music of Led Zeppelin & Queen will feature Collective students who have been diligently preparing for this event for over two months. Along with the live music, there will be a professional grade light and sound show organized by the students themselves. As with all Uptown Music Collective performances, the students are not only the performers but also direct the show. There is also a group of younger students, called “Tech Monkeys” who will serve as stage technicians 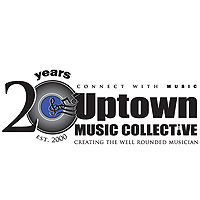