The Helicopter And The Presidency Exhibit

The Helicopter and the Presidency exhibit explores the iconic role played by helicopters in the American presidency. This year is the 65th anniversary of Operation Alert in which a Bell UH-13J helicopter evacuated President Dwight D. Eisenhower to Camp David in Maryland. The Civil Defense drill was the first time a president flew in a helicopter, but, it would not be the last. “With the 65th anniversary of President Eisenhower’s flight to Camp David, it’s important to show how flying in a helicopter has changed from the Secret Service fearing that the aircraft wasn’t safe enough for the President to fly in to it becoming a common mode of transport for the Commander-in-Chief,” explained David M. Vanderhoof, AHMEC’s Exhibit Designer and Retail Manager. Exhibit artifacts include scale models of the helicopters, glassware, patches, and more that tell the stories of the personnel who are affiliated the world’s most famous helicopter. It also features images courtesy of the Eisenhower Presidential Library, Smithsonian Institution, John F. Kennedy Library and Museum, Ronald Reagan Library and Gerald R. Ford Library among others. “We show that the story is one of every branch of the military, and how each administration puts its stamp on it,” Vanderhoof continued. “It’s also about how one type of helicopter, the Sikorsky VH-3 Sea King, became an icon and synonymous with the Presidency for over 60 years. Lastly, but equally important are the personnel who make this huge task seem effortless. 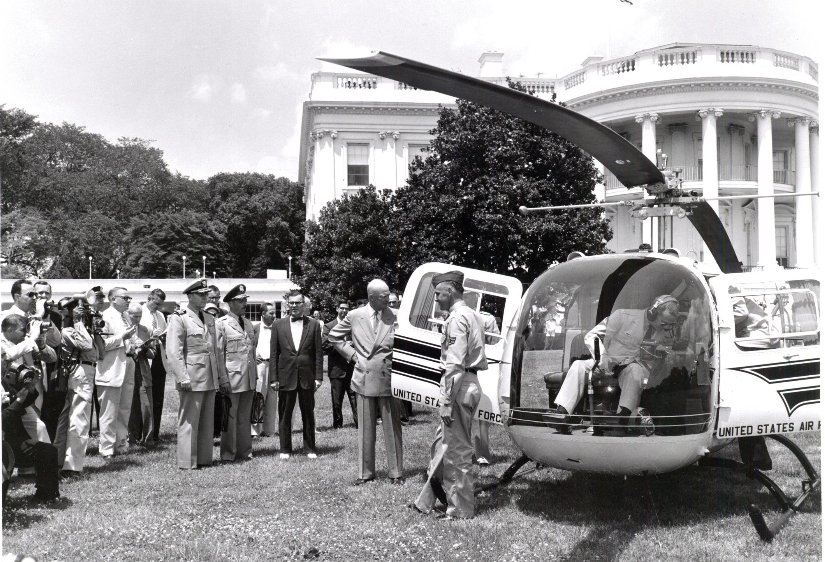