Stephen Towns: Declaration & Resistance examines the American dream through the lives of Black Americans from the late 18th century to the present time. Using labor as a backdrop, Towns highlights the role African Americans have played in shaping the economy, and explores their resilience, resistance, and endurance that have challenged the United States to truly embrace the tenants of its Declaration of Independence. For this exhibition, Towns is creating a new body of figurative paintings and story quilts that along with existing work expand the historical narratives of enslaved and free people who toiled under the most extreme hardships yet persevered through acts of rebellion, skillful guile and self-willed determination. The exhibition will be grounded with several existing works including his installation quilt, Birth of a Nation, 2014, to provide the foundation for the creation of Town’s new series of quilts that give voice to textile, culinary and agricultural workers. For the special series entitled The Coal Miners, six distinctive mixed-media paintings, feature Black miners of West Virginia who were relegated to the most difficult, underpaid, most dangerous and insecure jobs. Towns also foregrounds the stories of Black military workers, often frontline service people, who put their country first, which is the ultimate form of patriotism. A few works in the exhibition shine light on the history of convict leasing (commonly known as chain gangs) by the criminal justice system in which the Black community was made to serve the economic interests of white southern elites via forced labor. Towns calls attention to the hidden figures who helped shape American cuisine. Among these works the artist honors Ms. Elsie Henderson, who recently passed away at the incredible age of 107. Over the course of her life, Ms. Henderson used her culinary skills to nourish the appetites of several wealthy Pittsburgh families including the Kaufmans, owners of the Frank Lloyd Wright-designed Fallingwater in Mill Run, PA. Towns will participate in an artist residency program at Fallingwater in June 2021 to create new fiber works. Lastly, Towns pays tribute to Ona Judge, President George Washington’s runaway slave. Judge was an invaluable seamstress and body servant to Martha Washington, who as a teenager escaped Mount Vernon and fled to New England. 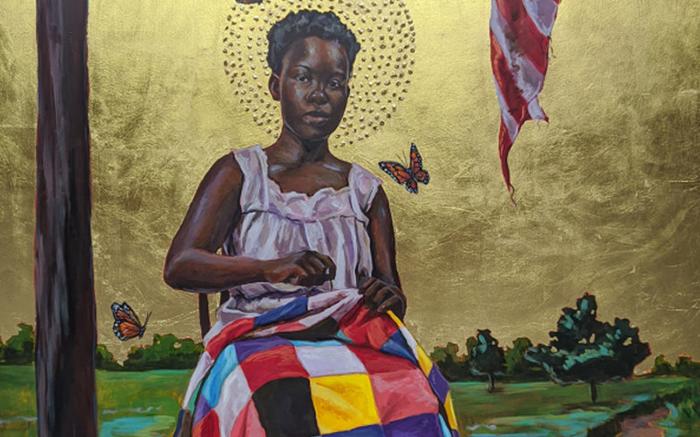