Carved in Stone Cast in Bronze Commemorative Sculpture of the Civil War Era: New Virtual Exhibit Opening at the USAHEC
On Monday, June 15, 2020 at 4:30 PM EST, the United States Army Heritage and Education Center in Carlisle, Pennsylvania will hold its very first virtual opening for their newest art exhibition: Carved in Stone, Cast in Bronze. It is an exhibition of commemorative Civil War era sculpture. The center has selected eight pieces of sculpture from the Army Heritage and Education Center’s artifact collection that have never been exhibited together including: The Standing Lincoln by Augustus Saint-Gaudens, a magnificent bronze American Eagle, marble busts of Generals George B. McClellan and Ulysses S. Grant, and several Rogers Group statuettes. This exhibit opening will take place virtually and will culminate with a Q&A session via Facebook Live with Mr. James McNally, curator of the exhibit.
The years between the Civil War and the end of World War I represented the great age of American sculpture. From Neoclassical Greco-Romanesque like sculpture carved in marble, to an era of ultra-detailed, more natural images cast in bronze. Sculpture was no longer just for parks and museums. Through new sculpting processes and cheaper materials, sculpture became affordable for every Middle American household. “Carved in Stone, Cast in Bronze” captures that evolution of artistic change that occurred during one of the most difficult times in U.S. history.
Mr. James McNally, Curator of Art, who developed this exhibit, states that through these works of arts: we begin to understand the life of Soldiers, the nature of war, and what America fights for.
To view the exhibit opening on June 15th, please visit our YouTube channel at https://www.youtube.com/user/TheUSAHEC or follow us on our social media pages. Viewers can participate in the Facebook Live Q&A with the curator by emailing questions to usarmy.carlisle.awc.mbx.ahec-ves@mail.mil or by direct messaging our Facebook page on the day of the event (https://www.facebook.com/USAHEC).
The exhibit can also be viewed in detail online at https://usahec.omeka.net/exhibits/show/carved- in-stone-cast-in-bronze 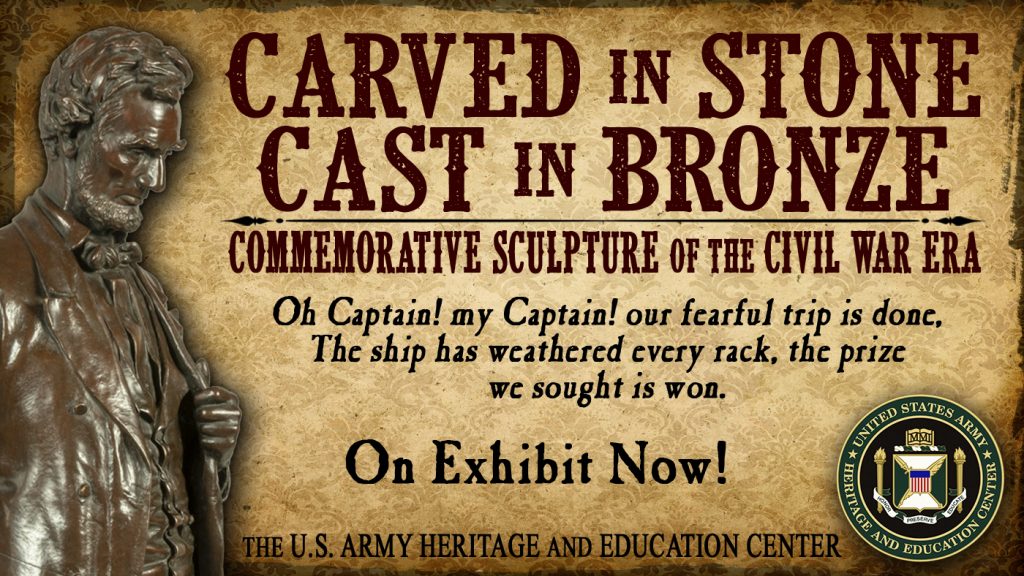